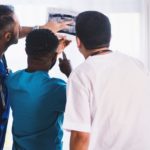 I have a coding question regarding the proper definition of stone location for a ureteroscopy procedure. I had a case in which a proximal ureteral stone became dislodged from the ureter during URS and flew back into the kidney during the procedure. Therefore, although the stone was actually a “ureteral” stone, all of the actual laser lithotripsy was performed in the renal pelvis. In addition, there was a known second adherent stone in the kidney that required extraction with a basket. A stent was left in the ureter following the lithotripsy. My understanding is that the stone that was in the ureter immediately prior to the surgery should be classified as a ureteral stone, regardless of where the actual lithotripsy was performed. Therefore, my argument is that this should be coded as a 52356 (ureter), and also 52353-XS (kidney), based on the pre-treatment diagnosis of ureteral and renal stone. Our coder is reluctant to do so because the actual lithotripsy was performed in the kidney. What are your thoughts?

We agree with you. You are treating a patient with a ureteral stone and a renal stone. The ureteral stone was treated with lithotripsy; the fact that you “manipulated” the stone into the kidney prior to lithotripsy did not change that scenario. The procedures themselves include approach and application for treatment and as such are not dependent on location in which the treatment is provided. The initial diagnosis was a ureteral stone and a kidney stone. At the end of the encounter, the stones were removed. If the second stone was simply removed by basket without lithotripsy as suggested by your scenario, then the correct billing would be 52356 and 52352-XS.

I’m having issues with prostate needle biopsy, outpatient facility: 52000, 76872, 76942, 55700. Medicare is not paying for the cystoscopy with the biopsy. I stopped billing the cysto code, but 76872 and 76942 are being denied. I would like the correct coding for the prostate needle biopsy with the correct modifiers. I did ask AUA Coding Hotline and was told not to use the cysto code and was given the modifiers to use, but I’m still getting denials.

The appropriate coding for a medically necessary cystoscopy at the same encounter as a prostate needle biopsy would be 55700, 52000, and 76872.

52000 is not bundled into a prostate needle biopsy and should be paid separately without requiring a modifier. (–51 could be added for private payers to identify the lesser procedure.) Medicare should not have denied payment based on bundling edits. If the explanation of benefits statements are still available from past service denials, we would recommend checking denial codes.

If you feel that the cystoscopy is medically necessary for a patient having a prostate needle biopsy, you may report the services on the same date, however, multiple procedure adjustment will apply to the cystoscopy. As with all services, make sure that your documentation supports the need and performance of the cystoscopy. It is also important to report the correct ICD-10 code for the cystoscopy.

Medicare has bundled the 76942 into code 76872. Although unbundling is allowed with a modifier, it is difficult to support the use of an appropriate unbundling modifier for a typical prostate needle biopsy. On the positive side, code 76872 was increased in value by 32% for 2019 to offset the bundling in this case. Therefore, coding for a routine prostate needle biopsy without cystoscopy can be reported as 55700 and 76872 if a diagnostic transrectal ultrasound of the prostate is documented in the medical record and medically necessary.

It should be noted that most private payers have adopted Medicare NCCI bundling rules for the prostate needle biopsy and will therefore pay similarly.

What is the appropriate coding for the following InterStim procedure? For the procedure, the existing device was removed, an incision was made over the device, and the device was pulled from the field. The wire was traced to the point of insertion. A small incision was made and the entire lead was removed. Access to the third foramen on the right side was obtained under fluoroscopy control with good placement of a new lead. The lead was then traced to the pocket of the generator and a new generator was connected. Connections were performed and tested.

Proper coding would be 64581 (Incision for implantation of neurostimulator electrode array; sacral nerve [transforaminal placement]) and 64590 (Insertion or replacement of peripheral or gastric neurostimulator pulse generator or receiver, direct or inductive coupling).

The two codes are not bundled; therefore, you do not need a modifier. (–51 could be added to 64590 to identify the lesser procedure for private payers.)

Although the old lead was removed prior to placement of the new lead, the removal of the lead cannot be reported separately as it is considered bundled into the insertion code.