I am coding a bacillus Calmette–Guérin instillation. While I know I cannot bill for the cathed urinalysis or the insertion of the indwelling catheter, can we bill for the catheter trays or catheters used to do the procedure? Medicare and durable medical equipment do pay for some instances when the patient wears the catheter home.

Unfortunately, the answer is no. The payment for all supplies is bundled into the procedure code when billed in the office and in the facility fee when billed in the ambulatory surgery center or hospital setting. Medicare only pays for catheters for home use when a medical condition is permanent (or long-lasting–over 3 months) and a plan of care prescribed by a doctor indicates the need for the catheter, including the frequency of catheterizations, for certain specific conditions such as retention of urine or urinary incontinence.

Can you tell me how to code and bill for pentosan polysulfate sodium (Elmiron) used for interstitial cystitis treatment? I can’t find a code for the actual drug. Our urologist said the code may also include heparin and bupivacaine (Marcaine).

You are correct; Elmiron does not have a code. It is an oral pain medication used in the treatment of interstitial cystitis. Normally, it is covered by Medicare Part D and Medicare Part C plans for self-administration per oral route. The drug does have a National Drug Code (NDC) and some have reported J3490 (Unclassified drugs). We have not seen much success in getting payment for this drug as it is considered self administered as an oral drug.

Likewise, Marcaine is difficult from a reimbursement perspective as it is typically not covered by Medicare. We have seen two separate codes used to report Marcaine: J3490 (Unclassified drugs) or S0020 (Injection, bupivicaine hydrochloride, 30 mL), which is the correct code within the Healthcare Common Procedure Coding System. S codes are typically not covered by Medicare but may be paid by some private payers. Heparin has two J codes and should be reported based on the amount used during the instillation: J1642 (Injection, heparin sodium [Heparin Lock Flush], per 10 units) or J1644 (Injection, heparin sodium, per 1000 units).

As with any drug, you will need to report appropriate NDCs and watch coverage policies regarding purchase of the drugs. Unfortunately, we have not found a good way to report and be reimbursed for the drugs provided.

We would encourage you to obtain an Advance Beneficiary Notice (ABN) for Marcaine which, if denied based on medical necessity, you can charge the patient. Elmiron is considered a self-administered drug and is considered to be non-covered. As a non-covered item, the Elmiron can be charged to the patient without an ABN. The patient can appeal to Medicare for coverage of the Elmiron provided “incident to,” which is the appropriate classification for this use. Remember that rules can change, there are many practices that will include both the Marcaine and the Elmiron on the patient ABN to protect themselves from any coverage change related to either drug. Finally, regardless of whether or not an ABN is signed, it is good business to let the patient know before they get a bill what they will be responsible for paying. 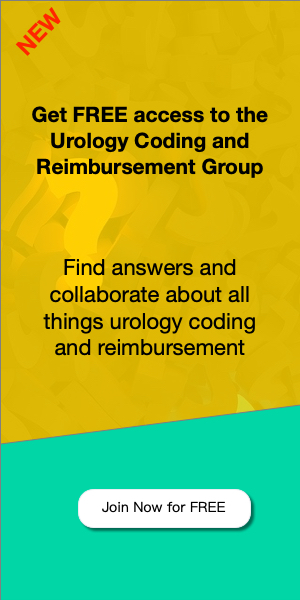