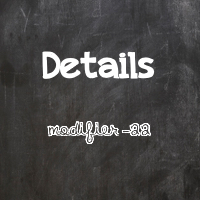 ​Does the following dictation qualify for the use of a Modifier -22?

It certainly talked about difficulty and the severity, but did not mention relative time. Relative time is what supports getting you paid more with the Modifier -22.

The payer is going to have a hard time adjudicating the claim and justifying paying any extra because there is no way to compare how much more difficult it was.

If you can resubmit and add an addendum and a cover letter, explaining how much more difficult the procedure was and make a reference to the time it took, relative to the time it normally takes, then it should be paid with an increased amount.

If you bill with a Modifier -22 without the proper documentation it will slow the claim down because it will push it through manual review, not result in an increased payment and may increase your chance for an audit.

If you bill the above with a Modifier -22 and with the proper documentation it will slow the claim down because it will push it through manual review, but should result in an increased payment and may not impact or may decrease your chance for an audit.

This is just one of the many scenarios and examples in the Urologist’s Guide to Coding and Billing.

Urologist’s that have never had a formal coding and billing course often don’t use or misuse modifiers because they never had the proper training and practice.